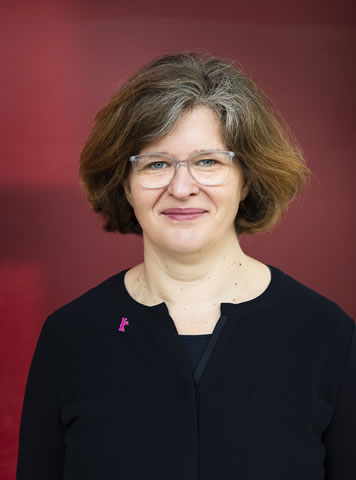 Christine TRÖSTRUM is one of the heads of Berlinale Talents.
Christine TRÖSTRUM was born in Ravensburg in 1972. She studied Cultural and Theatre Studies / Cultural Communication in Berlin, has additional qualifications as a systemic consultant for organisational development/change management and coaching.

Until 2000 she worked for film festivals in Tübingen, Augsburg and Marseille. From 1998 to 2000 she was project manager at the European Film Centre in Babelsberg, responsible among other things for the pilot project CyberCinema, the first worldwide demonstrator for D-Cinema. Until 2004 she was project manager of Cartoon Movie, European co-production market for animated films in Babelsberg as well as head of the International Media Week Berlin-Brandenburg from 2000 to 2005 (today Media Convention) at Medienboard Berlin-Brandenburg.

She has been working for Berlinale Talents since 2004, and in September 2008 she took over the overall management, which she has shared with programme director Florian Weghorn since 2014. She is one of the initiators of the Berlin Film Residencies, which is supported by the Berlinale as a cooperation partner, as well as the Talents International programmes in South Africa (Talents Durban), the Arab world (Talents Beirut), Mexico (Talents Guadalajara), Japan (Talents Tokyo) and Southeast Europe and the Southern Caucasus (Talents Sarajevo), which take place in cooperation with international film festivals and markets.

From 2016-2021 she was Berlinale's internal consultant for organisational development and change management. Since 2021 she is managing partner in the academy and consultancy biniasz und partner.